Last month, I filmed a concert given by the Russian-American pianist Vladimir Feltsman, who performed Rachmaninoff's Piano Concerto No. 2 in C minor at the Tilles Center with the Russian State Symphony, conducted by Valery Kuzmich Polyansky who is a Russian orchestral and choral conductor.

Being a concert pianist myself, I was looking forward to filming this event and listening to this rare, all-Russian, genuine performance of Rachmaninoff's Piano Concerto.

This concerto is one of my most favorite works for piano and orchestra. Indeed, I enjoyed both filming and listening to the performance.

I was very impressed with Mr. Feltsman's interpretation of the concerto. Mr. Feltsman never over-powered the orchestra and achieved a beautiful singing tone throughout all the concerto melodies. Fast passages were played with extreme clarity, and you can hear literally every note, especially in passages where he is providing the accompaniment.

The concerto features a grand finale with a very expressive melody performed by the orchestra's string section, accompanied by the piano's rich chords. Mr. Feltsman gracefully played these chords with much brilliance and warmth.

Two months ago, I had the privilege to work with Opera Dolce, an organization founded in 2009 with a mission to produce operatic performances of the highest artistic quality. On October 11, 2014, I filmed Opera Dolce's most recent concert at Washington Irving Auditorium in New York City. This concert was dedicated to the great Brazilian composer Antônio Carlos Gomes. Harold Rosenbaum conducted the Canticum Novum Singers and Craig Ketter was at the piano. Excerpts from six of Carlos Gomes' operas, as well as one of his choral works, were performed.

Antônio Carlos Gomes (July 11, 1836 – September 16, 1896), was the only New World composer who was successful in Italy during its "golden age of opera". Upon hearing his music, Verdi declared Gomes "a musical genius" and hailed him as his successor.

Three cameras were used to capture the brilliant performances sung by Luiz-Ottavio Faria, bass; Elena Heimur, soprano; Andrew Costello, bass-bartione; Pamela Lloyd, soprano; Adam Cromer, tenor; Elena Heimur, soprano and Philip Alongi, tenor. One of the cameras was placed very close to the stage to capture spectacular close-up shots as well. The large hall allowed me to place one camera on the balcony to capture the choir.

In the editing process, I was able to alternate between these camera angles to achieve a realistic video of the original live concert.

I sincerely enjoyed filming this special concert because it featured exceptional music and outstanding singers who genuinely understood the music and put all of their emotions to achieve beautiful performances. I will remember this concert for a very long time.

A website is an absolute necessity for a musician. Having a website is like creating an online digital press kit of yourself and your music. With a website you can reach out to millions of people throughout the world, get more exposure, and grow a list of e-mail addresses of supporters who want to hear from you.

When musicians hire me to design a website for them, they often show me a list of other musicians' websites and ask me which one is best. In response to their question, I tell them the following:

In the "Rubinstein at 90" interview at Arthur Rubinstein's home in Paris, when MacNeil tries to characterize Rubinstein as "the best" pianist of his time, Rubinstein scoffs: "nothing in art can be the best. It can only be different - itself. Each artist is a world, a universe unto himself."

And indeed the same also applies to a musician's website. There is no such thing as the best website. Each website represents a different artist with a different set of talents, skills, and qualities, and should reflect as much as possible what makes the artist and his or her work unique and appealing to his or her audience. 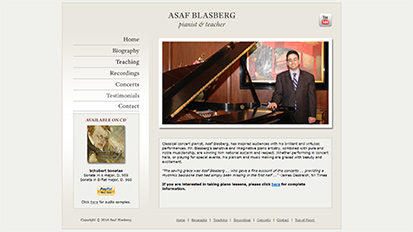 Asaf Blasberg, pianist
Know a Friend Who Should Get This Free Newsletter?