I had the pleasure of filming the Manhattan Wind Ensemble's most recent concert, given in the Fall of 2018. It featured music by Camille Saint-Saëns, David Holsinger, David Maslanka, Johan de Meij and Hector Berlioz. The concert was conducted by musical director Sarah Fernandez. What was so unique about this concert was that for the first time I had the opportunity to hear orchestral compositions which featured mostly woodwind instruments. There were no violins, violas, or cellos.

Berlioz's "Symphonie Fantastique," which was one of the pieces performed, had its entire string section swapped out with woodwinds. This change made a huge difference in how the composition sounded to the audience members and was quite pleasant to my ears.

Founded in 2007 in New York City, the Manhattan Wind Ensemble is a 50-person band comprised of woodwind, brass and percussion players. The Ensemble brings together dedicated professional and non-professional musicians to learn, grow and perform traditional and modern classical music. Its goal is to perform for the enjoyment of all members of the community in an affordable setting. The Ensemble also hopes to have fun playing challenging music, forming a group that supports and teaches each other. 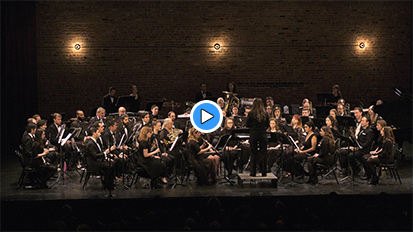 In her debut as the artistic leader of a wind band, Sarah Fernandez is the Music Director for Manhattan Wind Ensemble. Recognized for her humorously detailed imagery and tremendously exuberant podium presence, she's a passionate proponent for serving the community an enriching musical experience, performer and listener alike. She enthusiastically supports sharing the uniquely invigorating sound of the wind band with the community. Perhaps it is the school teacher in her, but she believes in being equally attentive to the musicians and audience members, making concerts musically and educationally engaging for a wide spectrum of participants. Fernandez sees a wealth of potential in the ensemble, and, as a new artistic voice, aims to encourage the performance of the "hidden gems" of the Ensemble's repertoire, as well as continue the legacy of supporting the classics.

For more information about the Manhattan Wind Ensemble, please visit the Ensemble's official website at www.manhattanwindensemble.org.

I recently filmed Handel's Messiah at St. Jean Baptiste Church in New York City presented by Camerata New York and the St. Jean Baptiste Festival Chorus, and conducted by Richard Owen. It was a three-hour epic performance amplified by one of the most beautiful churches I have ever filmed in my life, filled with huge columns and a huge audience. I was able to place one of three cameras in the balcony, which provided a spectacular overhead shot of the entire chorus and orchestra. Finally, the acoustics of the church significantly helped with the audio production, in what was, in my opinion, an amazing evening of music making.

Camerata New York was founded in 1999 in Vienna, Austria. In its opening season, the ensemble immediately garnered critical acclaim. The leading Vienna newspaper, the Wiener Zeitung proclaimed: "It's unbelievable how good they are."

Now in its seventeenth season after re-establishing in New York, the orchestra has had successful concerts in Carnegie Hall, Lincoln Center, the Cathedral of St. John the Divine, St. Paul's Chapel, Merkin Hall and St. Patrick's Cathedral, among others. Critics have hailed Camerata New York's "lustrous tone-quality" and "near-definitive" performances and they have been featured in the New York Times, Newsday, the Huffington Post, Opera News and Forbes.

With a current release on Albany Records, Camerata New York's acclaimed recordings have been aired on three continents including on New York's WQXR (classical radio station of The New York Times), WMNR and and SiriusXM.

With a flexible ensemble of up to 50 players, the performances have included collaborations with some of the finest artists and organizations including Alvin Ailey, Friends of the Arts, Hamptons Music Festival, soprano Aprile Millo, cellist Nathaniel Rosen and film star Alec Baldwin. 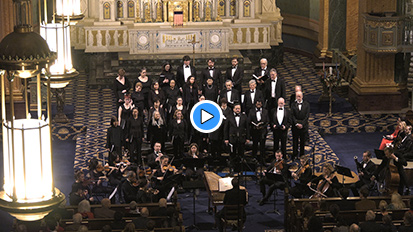 Maestro Richard Owen, music director and conductor of Camerata New York, is one of the most gifted and visionary conductors of the modern era. Of his conducting debut in Austria, The Wiener Zeitung (Vienna News) proclaimed: “Maestro Owen must be a genius… how flowing and musical this young American was able to realize the music from the podium.” Combing a successful career as a conductor, entrepreneur, pianist and organist, Maestro Owen is also music director of the St. Jean Baptiste Church and principal conductor of the Adelphi Orchestra. His vast repertoire includes symphony, opera, choral, ballet and modern dance and he has performed internationally throughout Europe and North and South America. He was formerly on the conducting staff of the New York Philharmonic (cover conductor) as well as the Deutsche Oper am Rhein (Düsseldorf).