This year, the 17th season of the 2015 International Keyboard Institute & Festival (IKIF) will take place at Hunter College, New York, from July 18 until August 1. All the evening concerts will be filmed and streamed live across the world.

The International Keyboard Institute and Festival (IKIF) is a summer piano festival that offers two weeks of concerts, masterclasses and lectures, and is open to participant students as well as to the public.

Since 1999, the Festival attracts students from around the world who have the opportunity to attend the Festival to study with Faculty and Artists, participate in masterclasses, and attend concerts and lectures given by some of the world’s best-known pianists and scholars.

The Festival has grown from a base of 30 participants to well over 100 each season. Participants who attend the Festival for two weeks are eligible to compete for $10,000 in the Dorothy MacKenzie Artist Recognition Scholarship Awards.

In addition, the webcasts will include interviews of artists, faculty members, and scholars, and the 7:15pm pre-concert lectures given by David Dubal.

Joseph Patrych, the well-known Audio Recording Producer, will also function as director for the live stream, switching the camera angles for our webcasts.

To watch the live stream, visit the IKIF web site on July 18 at 7:00pm at http://ikif.org/live. Jerome Rose, the founder and director of the festival, will give an opening introduction, followed by Mr. Dubal's pre-concert lecture at 7:15pm. At 8:00pm, Mr. Rose will perform the opening concert.

Throughout the many wonderful and memorable years at the festival, I had the honor of filming many concerts given by distinguished pianists.

The festival continues to gain popularity year after year by bringing prestigious concert pianists who give memorable performances, including Alexander Kobrin, who won the 2005 Van Cliburn International Piano Competition.

Mr. Kobrin gave a beautiful and inspiring performance of Rachmaninoff's Etude-Tableau in E-flat minor, Op. 39 No. 5

I enjoyed the tremendous range of dynamics that Mr. Kobrin was able to produce out of the 9-foot Yamaha CF X piano.

If you are interested in viewing more IKIF performances, please visit IKIF's YouTube channel. There are over 165 performances to watch!

Audio Recording by Joseph Patrych
Click here to listen to a short sample.

For more information on IKIF as well as a complete schedule of events, please visit the official website at http://www.ikif.org or feel free to visit the Facebook page.

Emmanuel Sikora Performs His Own Works at
The Concert Space at Beethoven Pianos, New York

Two months ago, I filmed a concert featuring the works of pianist and composer Emmanuel Sikora at The Concert Space at Beethoven Pianos, New York. The Concert Space provided a beautiful in-house 9-foot Hamburg Steinway for the artist. I filmed this concert with two cameras. Slow, gentle zooms with wide and close-up shots were used to faithfully capture the mood of each work.

Variations on an Original Theme for Piano was written in 2014. Emmanuel initially intended to write a variation set like the Schubert Impromptu in B-flat, but as he set pencil to paper and the music flowed, it came out more as an elegy. The coda was the first time that Emmanuel really explored his obsession with sinking chromatic lines. The work quotes six bars from the melody of his High School Alma Mater.

Emmanuel's Facebook page, The Piano Music of Emmanuel Sikora, features detailed descriptions of many of his works, which are available for free download on Soundcloud. This Facebook page is dedicated to increasing the awareness of his piano music in the world-wide musical community through social media.

Cedric Bluman, a piano student who studied with me at the International Keyboard Institute and Festival, informed me of a new film that he would like to shoot and direct. The film is about a young man's dream to become a professional classical music pianist and the obstacles that he faces to make his dream come true.

In order to help Cedric raise money to proceed with his project, he has started an Indiegogo crowd-funding campaign. If you are interested in making a donation towards the making of the film, click here to access the Indiegogo campaign web page.

As part of your donation, you will receive a DVD of the film with a bonus feature containing audio recordings of the complete repertoire featured in the film, as well as exclusive updates on the progress of the film.

About the Film (In the Filmmaker's Own Words):

"The film DISSONANCE explores how much patience, determination, and personal sacrifice is necessary for a person to create beautiful music.

"Music can be therapeutic, emotionally and spiritually rewarding--but does this come at a price? The film will focus on the progression and details encompassed within the perfecting of repertoire, to suggest that the process of becoming a better musician is ongoing, constant, and that perfection simply doesn't exist. 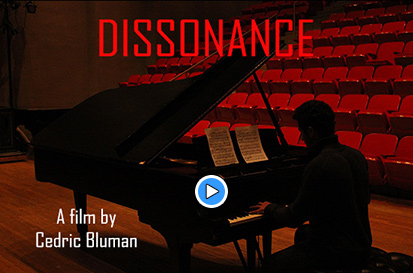 
A piano student has dreams of becoming a concert pianist but is confronted by the cutthroat nature of the professional music industry. Alone in New York City, he prepares for his debut recital; a performance that could make him or break him.

"Yet, why does our protagonist, musicians all over the world in fact, unrelentingly pursue perfection? Furthermore, a pianist's pursuit of perfection can simultaneously cause neurotic, alienating, antisocial tendencies and can also be emotionally and spiritually rewarding.

"The film also explores the ego; whether music is performed and mastered due to one's yearning to escape reality and their current psychological and emotional issues, or whether music can actually be therapeutic, or is music solely to boost one's reputation and to "show off" to an audience.The film will subliminally ask, what is the point of music?"