Andre Liigand films his recording session
in his Franklin Lakes, NJ residence.
His is playing his composition, Tallin Spring

Filmed by Asaf Blasberg
Here are 10 reasons why you should film your recording session:

Film Your Next Concert at Faust Harrison Pianos in New York

Faust Harrison Pianos, one of New York's largest piano dealers, is offering free concerts at their Manhattan and White Plains locations. Some of these concerts are performed by renowned musicians and others by artists that are on their way to becoming well-known.

To bring additional value to performers, Faust Harrison Pianos has agreed to allow me to film these concerts. The artist receives a DVD and Blu-ray Disc master of his or her live performance.

If you are interested in filming your concert at any of the Faust Harrison Pianos locations, please contact me at asaf@asafblasberg.com.

Dr. Hai-Kyung Suh , pianist, is a breast-cancer survivor who played to a sold-out audience and performed in concert as a benefit for the Suhhaikyung Foundation, which supports breast-cancer awareness within the South Korean community.

Click here to read more about the program and the story behind it.

Filmed by Asaf Blasberg
Liaisons: Re-Imagining Sondheim from the Piano

The performance featured seventeen pieces from The Liaisons Project, which received their NYC premiere at Symphony Space. The evening was presented in two parts; each half featured a panel discussion with the composers. The second half also featured an on-stage interview with Stephen Sondheim by Mark Eden Horowitz.

Click here to read more about this inspiring program.

Click here to read the New York Times review of this event.

NIMBAYA! - The Women's Drum and Dance Company of Guinea

In celebration of West African culture and women's role within it, NIMBAYA! inspired audiences with powerful performances of djembe drumming and dance. The production was recorded at Symphony Space in Manhattan, one stop on a world performance tour.

Click here to read the New York Times review of this event. 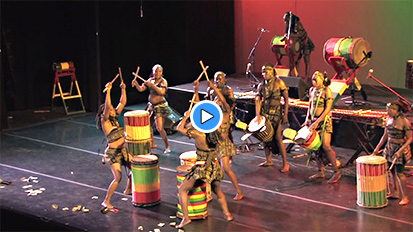 Filmed by Asaf Blasberg
Know a Friend Who Should Get This Free Newsletter?