I want to share with you a unique and amazing concert that I filmed recently in Merkin Concert Hall. Seven young virtuosos from Kaufman Music Center's Lucy Moses School, Special Music School and Young Artist Program performed concertos by Mozart, Tchaikovsky, Shostakovich, Weber and Spohr, plus a world premiere by Nikolai Rakov. The performances were filmed in 4K Ultra HD, and you can watch them on YouTube using HDTVs or 4K Ultra HDTVs. The following is a brief description of Kaufman Music Center and its affiliated schools.

Kaufman Music Center, located in New York City, features a prestigious concert hall called Merkin Concert Hall. The hall offers a large, bright stage with excellent acoustics. The hall presents some of the best artists in the classical world as well as musical theater performances, featuring Broadway's top professionals. Some of the series presented in the Hall include Broadway Close Up, Tuesday Matinees, the Ecstatic Music Festival, Broadway Playhouse, New York Festival of Song and New Sounds Live. The hall is available for artists and ensembles to rent. 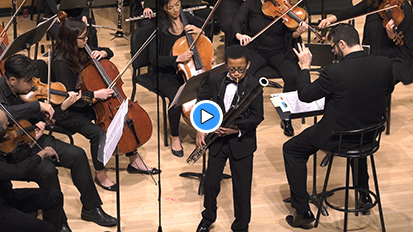 Special Music School is New York's only K-12 school that teaches music as a core subject. The school is a groundbreaking public school for musically gifted children offering musical training, including private instrumental lessons during the regular school day. The school combines intensive instrumental study with a rigorous academic program, providing a strong foundation for a lifetime of music without compromising academic studies. Modeled on the renowned special music schools of the former Soviet Union, Special Music School at Kaufman Music Center successfully ensures that music is a primary component of each child's education.

Lower Your Cost and Risk When Creating a Video, DVD, and Blu‑ray Disc

Previously, when I filmed artists and produced CDs, DVDs and Blu-ray Discs (view examples), I offered a bundle that included the following services:

Now, however, using my new, multi-step process, the artist can commit to one step at a time and move to the next step(s) at his own pace or choose not to continue. The following is a short list of the steps and the value that each step offers to the artist:

In this step, I combine the footage from all cameras and synchronize the audio recording with the camera angles. I edit the video and the audio according to an artist-provided editing list, or with the artist in my studio in person.

Using the edited footage, I can create a CD for artists who wish to release just an audio record. For artists interested in releasing a video, I can author a DVD and/or Blu-ray Disc, with an artist’s choice of either a menu with a simple Play button, or feature chapter menus which allows a viewer to select a specific piece on the disc. More information about DVD/Blu-ray authoring can be found here.

Once the disc is finalized, I can create a small amount (up to ten) of CDs, DVDs and Blu-ray Discs at an affordable price.

I work with an external vendor who creates industrial-grade copies (1,000 or more) of CDs, DVDs and Blu-ray Discs. This is the final stage of production.

Deliverables and Benefits:
Know a Friend Who Should Get This Free Newsletter?